Example of an F1b Goldendoodle

Example of an F1 Goldendoodle 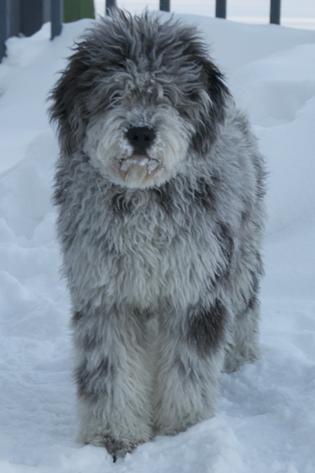 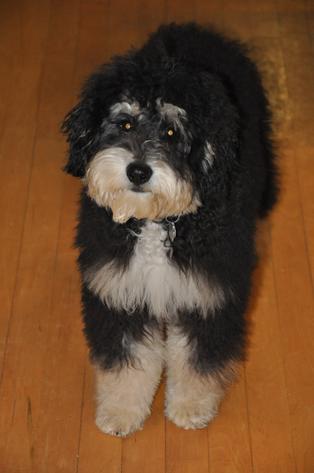 What are our goals as breeders?

As breeders of Goldendoodles, generations are an important thing to have knowledge of and base our breeding decision off of. My personal goal as a Goldendoodle breeder is to produce a dog with the stockier build of the Golden Retriever, with the the intelligence of the Poodle and more laid back temperament of the Golden Retriever. Also, long term I hope to have all my dogs have two furnishing genes, like the Poodle, but maintain a combination of wavy coats and loose curly coats. These goals are going to be slightly different for each breeder, but you will find the majority of breeders of Goldendoodles are looking for something along these lines.

F1 is a pure bred Poodle crossed with a Golden Retriever. F1's are moderate to low shedding puppies. F1's exhibit hybrid vigour (Generally healthier than both parent dogs). This generation can be good for those with mild allergies, but I would recommend at least F1b generation and preferrably a puppy with two furnishing genes for those with allergies.

F1b is a pure bred poodle crossed with a F1 dog. F1b's are more non-shedding than the F1 cross. F1b's exhibit less hybrid vigour but do still benefit from it. This generation is more suitable for those with allergies, but I would still recommend testing for two furnishing genes if there is a severe allergy in the household.

F1bb is an F1b crossed with a Poodle. F1bb's are non-shedding. Often if an F1b carries for Improper Coat and you are wanting puppies suitable for allergy sufferers, you can cross the F1b back to the Poodle to maintain a proper coat and better for those with allergies.

F2 is an F1 crossed with another F1. I do not breed F2's. The only reason for this is 25% of the litter will have straight coats on average and this is not a trait that I want to breed into my dogs, as they will shed and not be good for allergy sufferers. That being said 75% of the litter have wavy to curly coats.

After the F2 generation there is debate on how to move forward with proper terminology.

There is a field of thought that we should use proper Mendelian genetics for naming each generation. This would go by the theory that each generation is characterised by one number higher than the parent breeds lowest generation. Ex. F2 to F2 = F3, but also F2b to F1 = F2, F7 to F1 = F2, F3b to F1b = F2, while this works genetically, I feel with the amount of backcrossing to a Poodle that goes on in Goldendoodles would actually make this type of charting, not only confusing, but also misleading.

The other train of thought is to do generations using an algebraic method. By doing this an F1b to F1 = F2b, F2b to F1 = F3b, etc. The problem with this method is it is not technically correct either.

My answer: We do neither! Once we get past an F1b generation we should be focused on structure, temperament and DNA'd coat type to make future decision on what generation to breed to. Genes don't work on a straight percentage basis. You will get some F1b's that have taken on a lot of Poodle traits and some F1b's that have taken on a lot of Golden Retriever traits. We need to sit down with each breeding dog and evaluate all their traits and what we feel they have taken after more to make proper breeding decisions. We also need to DNA test each breeding dog for coat traits, such as Furnishings and Curl (Can also do Shedding locus if wanted).

If I have an F1b that is long and lean and has a curly coat, that tests as two curl genes and two furnishing genes​, we know that this dog has taken on more Poodle traits than Golden Retriever traits, so making a decision to breed the dog to a Poodle, would not be a wise decision when you are wanting our breeding goals.

My proposition for deciding on what generation to breed a dog to is to have an evaluation of each dog you wish to breed. Many breeders make these decisions based on mathematical generation and emotional attachment to their dogs. We need to take the emotional attachment away to make objective decisions. Then we need to look at the strengths and weaknesses of each individual dog and pair them with a mate that complements them based on structure, temperament and coat traits.

Dam #1 I could breed to either Stud #2 or #3 and get the coats I want, but would probably choose Stud #3 because of the structure and temperament.

Dam #2 I could breed to any of the studs and get the coats I want, but would pick Stud #1 based on structure and temperament.

Dam #3 I could breed to Stud #1 or #3 and get the coats I want, with avoiding lots of curly puppies in the litter, but would pick Stud #3 because she has enough stocky build, that I can breed in a moderate build easily and maintain an entire litter with two furnishing genes.

***Note: This was purely a discussion on breeding generations. We assume in all breeding decision that we are always making sure that each individual dog has passed their health testing thoroughly and is conformationally sound before any breeding every takes place.