This document is aimed more at Breeders and will have genetic terminology used. But, for those not familiar with these, I will give a brief outline of some basic meanings.

A capital letter means it is a dominant trait, ex. B= dominant.

A lower case letter means it is a recessive trait, ex. b = recessive.

Genetic carrier (Carrier), means that the dog has an inherited recessive trait that it does not display, but can pass on to offspring.

Sable = A Black or Brown dog that will fade to a light (usually) tan or silver body, with dark tips only remaining over time. As a puppy you will see the lighter colour coming into the coat as the base of the hair.

Parti = Parti is when any of the above colours also have white markings. Parti's generally have more than 30% white on them.

Abstract = Abstracts when there are white markings present on the face, chest and/or paws of a dog.

Silvers (or Silver Beige) = A Dog that started out as either Black or Brown and faded over time, starting at points with silver hairs.

The most common Goldendoodle colours are White, Cream and Apricot. The same gene also produces Reds. You need two copies of this gene for it to be seen on their coat, as it is a recessive gene. These dogs can have either Black or Chocolate pigmentation. This gene gives a range of shades within it, going from white to red. If you breed a white to a red, you will generally get a range of colours between those colours, but many would fall into the cream and apricot colours. If you are wanting light white, breed white to white, if you are wanting darker reds, breed darker red to darker red. The gene that determines whether a dog is White, Cream, Apricot or Red is the E locus. It is also important to note, that the K locus and A locus will not be expressed if a puppy is genetically e/e.

In order to get Phantom, Brindle and Sables you need the combination of two genes working together. The first gene is the K locus. There is the dominant gene Kb and the recessive gene Ky. Kb is a blocking gene that does not allow expression of the A locus (second gene needed to produce phantoms/sables), so if you have even one Kb gene the A locus can not be expressed no matter what the genes are on that locus. Also, Brindle is believed to be found on the K locus and only needs one copy to be expressed.

Ky/Ky = Expression of A locus allowed

Secondly the A locus is what will determine what colours we see on the solid black or chocolate colours. This is a tiered system as follows:

Parti is a colour that is becoming more and more popular. It is white markings on any other colour already noted above. Parti is another gene that is not found in Golden Retrievers and because it is a recessive gene you will not see it in F1's, but can get parti's in F1b or above generations. Solid colour is dominant and parti colour is recessive.

Abstracts are often a result of a dog carrying one parti gene, but not all abstract carry parti and not all parti carriers have abstract markings.

Silvers were thought to be caused by the D locus and a recessive gene, but this is not widely accepted, as the D locus has only been proven to produce blues, charcoals and lilacs. This is more likely in our opinion, as many breeders have noted that silvers come in such varying degrees, that they might not be a straight dominant/recessive relationship. Also, it is highly likely they are caused by a completely different gene than blues, etc. 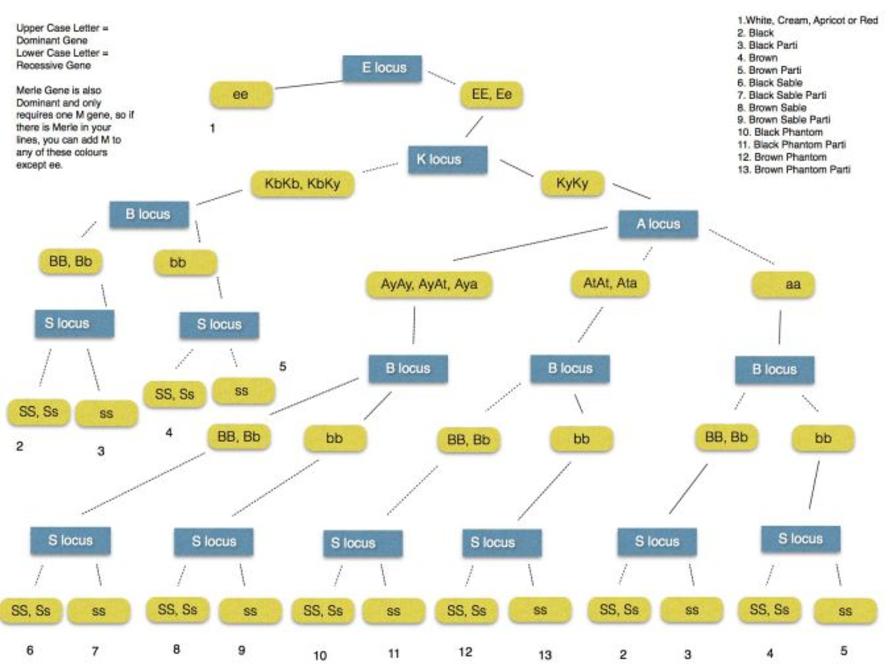